All About the Wedding Dress of Princess Madeleine of Sweden

Princess Madeleine is someone most can relate to; days before her wedding she used whatever she could (royal privilege) to get out of a traffic ticket. Her American husband, financer Chris O’Neil, turned down a royal title so that he can keep his American citizenship. The couple, in all sense of the word, is modern. And even though it has been almost a year since their wedding day, Madeleine’s wedding dress still deserves some spotlight. It is, after all, perfect for the summer. 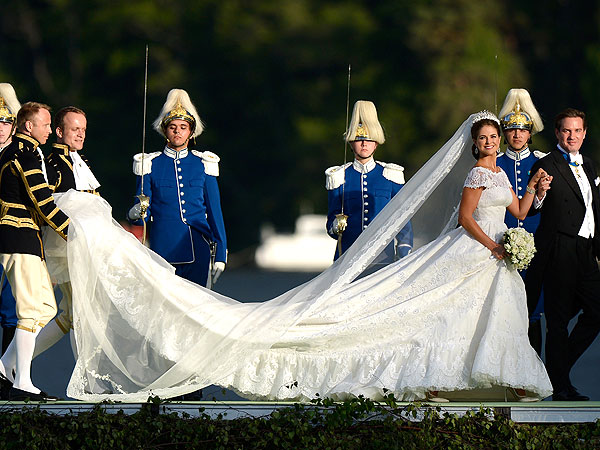 All About the wedding dress

Princess Madeleine married Chris O’Neil who chose to not take a title.

Named the 12th Hottest Young Royal by Forbes, Princess Madeleine chose a dress almost as gorgeous as herself. The Valentino Haute Couture wedding dress looked gorgeous with the veil. The royal court described her wedding dress:

“The wedding dress is made from pleated silk organza with appliquéd ivory-coloured Chantilly lace. The upper section of the bodice is lace with a deep-cut back. Narrow vertical pleats open up from the accentuated waist, above the wide skirt, which ends with a four-metre-long train. The veil is also silk organza, and is edged with tulle scatted with point d’esprit dots and small Chantilly lace orange blossom.”

Princess Madeleine had been working very closely with Valentino Garavani while he designed the gown. Valentino described the process of working with Madeleine as “just so easy”. “She is a very lovely girl. She is modern, full of energy and enthusiasm, and she is so beautiful! It has been a pleasure and an honor.”

Madeliene’s bouquet was made of classic white garden roses including Schneewittchen, Austin roses,and lilies of the valley. Following tradition, she also included myrtle that came from a bush that had been brought to Sweden in 1905. Her wedding shoes were ivory organdy with woven point d’esprit dots. Madeleine’s tiara was decorated with orange blossoms.

Another Dress for Princess Madeleine

Hours after the wedding, Madeleine changed into a white ball gown for the reception. Embellished with crystals, the gown featured a fitted bodice and a full skirt and a long white ribbon tied into a bow around her waist. Her mother, Queen Silvia, first wore the dress when she attended the Nobel Prize Ceremony in December 2001.

Madeleine wore her hair down for the reception and spent the evening dancing with Chris and visiting with guests over various Swedish delicacies. Over 600 guests traveled by boat to the reception. Madeleine wore this ball gown for the wedding reception.

All About Princess Madeleine and Chris O’Neil Madeleine and Chris were married in Sweden at the Royal Palace Chapel.

Madeleine and Chris met in 2010, when Madeleine moved to New York City after her engagement to lawyer Jonas Bergstrom was called off. Madeleine was working for the World Childhood Foundation when mutual friends introduced Chris and Madeleine and in October 2012 they announced their engagement. They married on June 8 2013 and their baby, Princess Leonore, Duchess of Gotland, was born on February 20, 2014.